The most exciting 30 minutes you’ll ever experience!

Fly like an eagle over West Point, the nation’s oldest military academy and the very location that George Washington considered to be the most important strategic position in America during the Revolutionary War. Follow the glittering path of the Hudson River to take in the sights of the Hudson Valley’s historic landmarks as you soar over The Point and the majestic ruins of Bannerman Castle.

As you approach Mount Beacon from the air, anticipation builds as you drop low then climb up the mountain like the first ascent of the most exciting roller coaster you’ll ever ride. Then, swoop down the mountainside, and the weightlessness of the descent makes you feel like you’re really flying. There’s no other feeling like it in the world!

Come fly with us for an unforgettable family adventure, epic date, or bucket list experience for thrill-seekers.

Gaze upon the Hudson Valley’s breathtaking natural landscapes and historic landmarks during a private helicopter tour over West Point.  Book your flight now and we’ll contact you within 24 hours to confirm your date, time, and customize your route. We can even fly over your house!

The Robinson R44 helicopter seats 3 passengers.* This helicopter tour is family friendly!
*weight limit of 300lbs per seat or a total of 600lbs for 3 passengers combined.

$300
includes a private helicopter tour for up to 3 passengers. 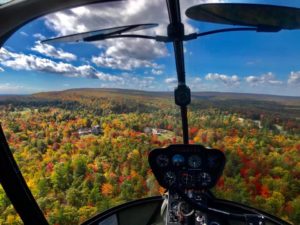 “The pandemic forced us to find an alternate way to celebrate our 25th wedding anniversary and Heather turned out to be the silver lining on our silver anniversary. Now we can’t imagine having spent it any other way! Seeing the brilliant fall colors enveloping the Hudson River, Mt. Beacon & West Point from this viewpoint was utterly fascinating. We highly recommend booking a tour with Independent Helicopters. Heather’s company is top notch and you will not be disappointed. Kudos to you, Heather! Thank you! We’re still smiling!”

“Love the staff, love the crew. Flown with Heather on several occasions now. She never ceases to amaze me with all there is to take in throughout the Hudson Valley from above. Better yet, have you touched a cloud yet?!?!”

“I had the pleasure of going up with David. The scenery from above is breathtakingly beautiful and honestly I can’t wait to do this again! David was informative and knew all the good spots to see. Thanks to him, I was able to take some gorgeous pictures. I was very at ease for my first time in a helicopter and had a wonderful time. Highly recommend taking a tour with Independent. Keep up the great work all. :)”